Well a mixed up freaked out bag this week! I went out for the day with the idea being to casually explore around the Creeky Marsh this week. I wasn’t sure where I’d end up. The spot I’ve ‘used’ a few times this year was an option. But this time I didn’t make it that far. Instead, I discovered that I was able to get to Creeky Bog and there is some mushy shore line starting to peek out!

So that’s as far as I got. Like last fall, the whole area is mushy and deep. But I found one particular spot that was waist deep without even trying. I was so incredibly happy. I spent at least an hour clearing debris and yanking out sticks and mushing it around to a very, very excellent depth and consistency. It was wonderful to play in! Eventually after a solid hour of playtime, I managed to fight my way out of the deep hole and off into the trees to clean up.

So I’m maybe 10 minutes into my cleanup, taking my time. The bugs were pretty bad but I lit a smoke and that helped. I got a few bits of clothes off and rung out and flung off as much mud as I could, then hung them on a tree branch, like I usually do.

And then I heard it.Swish… Swish… Swish… Like the sound of oars paddling down the creek. So I layed low for a bit and sure enough there was someone coming right into the little nook off the side of the creek that I was playing in barely 10 minutes ago. I don’t know if they saw me moving around. I don’t know if they saw my stuff hanging on the tree branch. But I am pretty certain they saw the muddy hud hole and the pile of muddy sticks I pulled out of it. Whoever it was stopped to investigate, so I took off as quietly as possible farther into the bush.

I tried to watch what was happening, but I couldn’t see very well through the trees. So I’m almost 100% sure they couldn’t make out who I was. I couldn’t make them out either. But they did a lap or two around the nook, and called out ‘Hello’ at least once… I was freaking out something fierce at this point… A minute or so later I hear another voice calling out. His friend I guess. They exchanged some words that I couldn’t make out and then seemingly went on about their way.

I managed to get cleaned up and retrieve my clothes from the tree branch, and made sure I stayed away from the creek as I high-tailed it the fuck out of there!

… so this, obviously, is bad. If they know who’s land that is and tell the landowner, I’m fucked.  If they start telling all their friends they saw a naked guy in the bush at that spot, I’m fucked. My footprints are scattered in exposed mud pools all over that area. And now we’re not getting excessive rain any more and they’re drying up and staying visible instead of being washed away. At this point, returning there would be horribly unsafe and stupid…

The good news is that in all my trips out this year, I don’t think I’ve been seen at all walking down the public road that leads to the trail, so if someone does talk to the land owner they may not clue in that it was me. But again, I don’t know what all they saw so the possibility exists that they will be on to me and I’d never have a clue…

And yet I’m already planning my next trip!  The mud there is the deepest I’ve ever found around here (although parts of Truck Hole Trail come pretty close). Obviously there would be some extra heavy changes to either my routine, or my route. I may try to conceal the place better from the creek, since I often encounter (as in hide from) people rowing along the creek.

Even smarter, I think, would be to continue on to the Creeky Marsh area and see if I can find more of this awesome deep mud.  The advantage to this idea is that there is another offshoot of the creek that isn’t so easily seen, and definitely more difficult to navigate. This would offer some protection. I did mush around there last time and found that there are plenty of sinky places. So, I think this is the plan. See you next time! 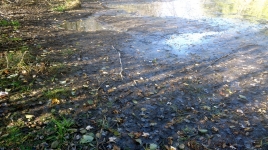 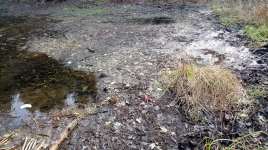 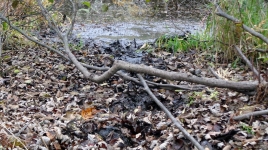 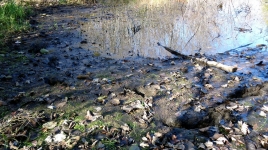