I finally found a day off to spend wandering through the forest again. I tried to reach an area that looks like it might have some nice mud. The forest around it is pretty hardcore, so I gave up after about 2 hours. There’s a chance I might try to visit it again but I don’t think the surrounding area is going to dry up at all this year. It’s a bit disappointing, since the area is pretty well hidden from everything. It’s reasonable to surmise that there would be some nice deep stuff there if the water was low enough. It also wouldn’t suffer the same flaws that almost got me caught a few weeks ago.

So I went back to the area I explored earlier in the season. I was a bit surprised to find that the small creek I was following is still babbling away and doesn’t seem interested in drying up. There was a swampy pond along this creek that I was planning to check out when the water went down, so I visited that too. It’s got some pretty deep muddy banks now and so shows some promise… I kept going and checked out another small pond I was looking at earlier in the year. It’s still full of water, so I didn’t hang out there for long. The small creek continues after the first swampy pond so I followed that side of it for a while, and found a nice deep spot along the side of the creek. I ended up doing my thing there. It was OK, but not really the best. It’s a good sized area and there was a thin layer of water on the top, so as I mushed around it got really nice, but it’s full of tiny little sticks and twigs and stuff and I spent more time removing them than I did having fun… So I would go back there only if there’s no other options.

For my next excursion, the plan is to go past the danger zone and continue exploring the marshy area yet again. The last time I was there the water was down enough, and I was consistently stepping in mud a foot deep or more. Now with the water down a little bit more still, I plan to go back and check it out. This area would be really nice to find a spot in because the forest isn’t near as thick (which means much fewer sticks in my nice clean mud), and it’s not directly along the creek’s main shore line, so the chance of encountering people on the creek is much less. I’m pretty excited about it, and I really hope I’m not getting my hopes up for nothing.

The other side of this plan is that I still pass the original Creeky hole. While it’s not as deep as the banks I’ve been playing in, the mud there is mostly clay, and is very clean relative to the other holes. It’s got a consistency and texture that is easily two steps up from the organic-rich creekside areas.  There is a part of me that wants to return there. Whether it happens or not will likely come down to whether I feel like expending the extra cleaning effort (the clay is much more difficult to wash out than the more organic mud).  There’s also the possibility that I would need to bring in some extra water to thin it out a bit… The thick clay is really awesome, but if it’s thinned out a little bit it becomes even more awesome, plus I need a bit less effort to move around in it heh.

The summer is pretty much over for cottagers and students, so at this point in the year, the MNR starts to lower the water levels in the surrounding lakes.  I should start to see more deep mud shorelines emerging over the next month or so. Next week looks pretty nice, weather-wise. There are currently 3 hurricanes making their way across the Atlantic ocean, and the weather all the way up here is cool and wet as a result. Once they’re past we are expecting to warm up again… 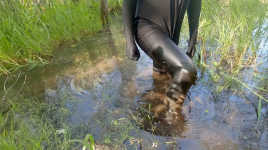 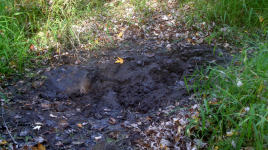 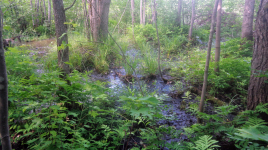 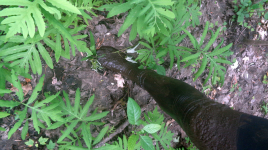 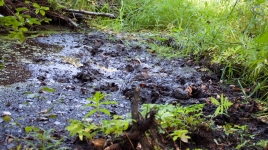 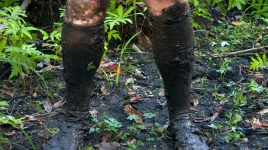