I went back. I went back to the stirred up pit that I so much feared just a few nights ago. I did not regret it. As it turns out, it’s a bit easier to hide from the truck lights than I thought.

So I parked in the same spot I did the other day, and hung out along the side of the area. I didn’t venture into the nice looking mud in the foreground, but instead stomped around the side a bit farther from the road. It was more than good enough.

As I trudged around testing out a few areas, it quickly became clear that the 4-wheelers had done a remarkable job of stirring the pit up real nice. There was one point where I stepped in right up to my waist, and it was glorious!

The mud was very soft and mushy and it was an absolute thrill to play in, if not just a little bit on the chilly side. Some tree branches and such under the surface and all that, but absolutely zero stones, and none of the stupid little twigs that frustrate me so in most forest-side pits.

I am so glad I went back! At the same time, though, I’m saddened to realize that is my one and only trip to that spot. I will not likely return there, at least not until next fall. 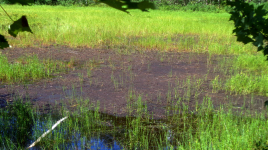 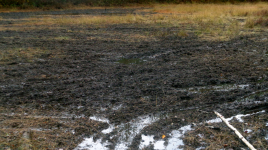